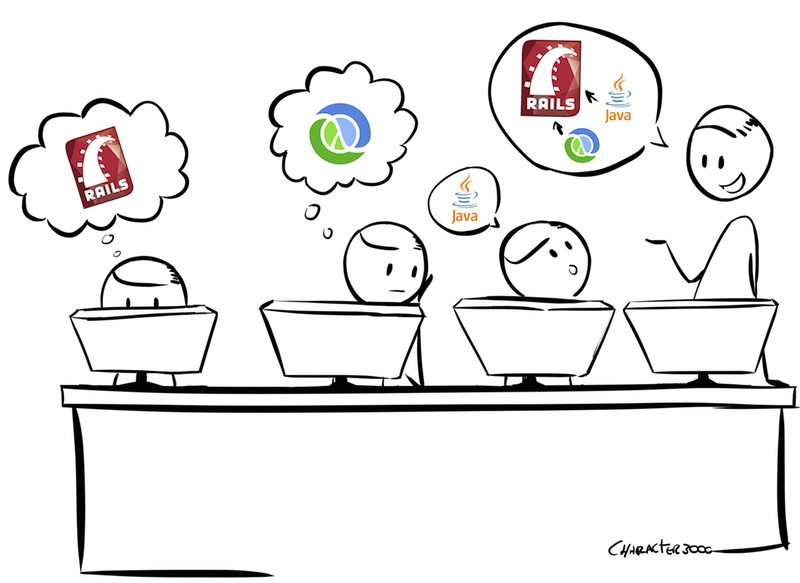 In the past 6 years I’ve worked on web applications in Rails, Clojure, Java and back to Rails. This is an overview of these past years, the benefits of working with such different tech stacks, and also it’s drawbacks.

Overview of the languages and projects I worked on

This was a big project in Rails 2.3. It was the typical Rails monolith that had gone out of control. It had +1K endpoints and used lots of gems. It was actually impossible to upgrade because of dependencies. At some point it had several maintainability and performance issues, as we would expect from a fast go to market approach.

But the team focused on turning the ship around. We started following clean architecture’s guidelines. We used presenters, interactors and repositories. At some point I believe part of the code base was actually enjoyable and properly built. The amount of bugs and performance issues hugely declined and we were proud of it (more details at Zero bug policy). But we had only touched maybe 40% of the application.

At this point I started to search for other tools. I went searching for something that would be more adapted to what I wanted: productivity, code quality and performance.

I had the opportunity of bootstraping a new product and was lucky enough to do it in Clojure. This was a huge shift, going to a new programming paradigm, in a language that has an alien syntax. Without a doubt that Clojure is my favorite programming language. I’ve learned a lot and even today I follow the community because of the huge amount of innovation that comes from there.

We implemented a web api with several bounded context services. We used async HTTP and async communication to the database, making the server fully async end to end. Everything was fast and we were very productive, and were constantly learning.

Not everything was great. Hiring was problematic. It was complicated to find people that knew Clojure or even that were willing to learn. And bringing people from other stacks always had a big ramp up.

But my main issue with the product was that the business wasn’t scaling. There we had what we thought to be a good architecture and good implementation, but it wasn’t being put to the test.

So I started looking around. This time I wanted a big scale project. Work with big data, whatever the language.

I found a company that had huge scale projects, and they use Java. At that time I didn’t care, I assumed that I was going to use Java entreprise-ish tools and that it would be a huge shock coming from two dynamic languages. But I was willing to learn and the company bet on me.

Fortunately the Java projects were not entreprise-ish. They were very lean and actually very similar in architecture with what I had worked on before. They had a layer just for HTTP handing with “controllers” and JSON serializers. They had a layer just for business logic, etc. And using Java 8 was actually good because I could use several constructs that I learned from Clojure.

In fact everything was more strict. Having to define POJOs for all concepts was cumbersome. But I actually didn’t fell that productivity slowness that I heard about so many times on Rails and Clojure communities. I was actually fast and productive and I was liking to program in Java 8. It was much more verbose that’s true, but a good IDE helps a lot on that matter.

At some time I thought that the Rails community could actually learn a lot from the Java community. And vice-versa. For example, in Java you take your time to define your models and document them. And Java developers would be proud of that and say to me: “you didn’t have this at your dynamic languages, how could you do a refactor and know that everything was ok?”.

And this is true. I did a couple of product wide refactorings. The IDE helped a lot and when everything compiled (something that was not always easy to accomplish) I was in fact confident that everything was ok.

But the funny thing is: it was very rare for me to need to perform these kind of huge refactorings on dynamic languages. While is true that dynamic languages could gain to have more definitions on the data and models used, the fact is that when you program on that environments you build code that is easier to change.

And that makes me wonder: if I don’t see huge changes, why is it so hard to do upgrades? Why are there so many breaking changes? This is something that clashes with the Java and Clojure ecosystem where they have a huge focus on backwards compatibility.

Another thing I’m getting is that the new kids won’t like rails, and it’s being harder to hire. Now the cool kids prefer Go or Elixir and frown at Rails. Honestly I wasn’t expecting that.

Anyway, I do believe that having a good team and a good problem to solve are the main requisites for great programming. And I’m eager to put Rails to the test and try to take the most out of it.

So, what have I gained from using so many languages?

Having worked on several ecosystems really opened my eyes and made me consider several ways of doing things. It’s all about the trade-offs, and as an Engineering Manager I have to gain from being able to review code from an arbitrary stack. I may not be the best low level reviewer but from what I learned I do have lots of inputs to provide.

For an Engineering Manager position, I believe is a must, and I feel that I have more insights because all those different experiences I had.

Having knowledge of several languages does make me more versatile. But also makes me less proficient and skilled at a particular language. It’s more complicated for me to get a job as a senior engineer. I did apply for a senior position some months ago and while I was proud of my challenge, the company choose not to bet on me. But after consideration I realised that I failed on the “is this a senior developer” test.

Companies expect a seasoned developer at a specific language to have some kind of traits, skills and knowledge. For example:

And it’s understandable if a company doesn’t want to bet on someone that is seasoned but that will have a ramp up. So if you want to switch area or stack, my advice is to go for a mid-level developer role. Start from behind and get up to speed quickly.

I remember a time where I was a game programmer. I was already an experienced developer but I was a junior game programmer. I had a bug on my code related with an object’s rotation. A teammate just pointed out to me and gave me the solution. But I just didn’t have the “brain muscle memory” to process that information quickly.

Being a specialist demands lots of time doing the same thing. There are no shortcuts.

There are several layers of knowledge we need to work on a project. While learning languages is difficult, there are much more things that we need to know.

So, the language is just a small part. I actually believe the tooling and the overall ecosystem are more time demanding to learn.