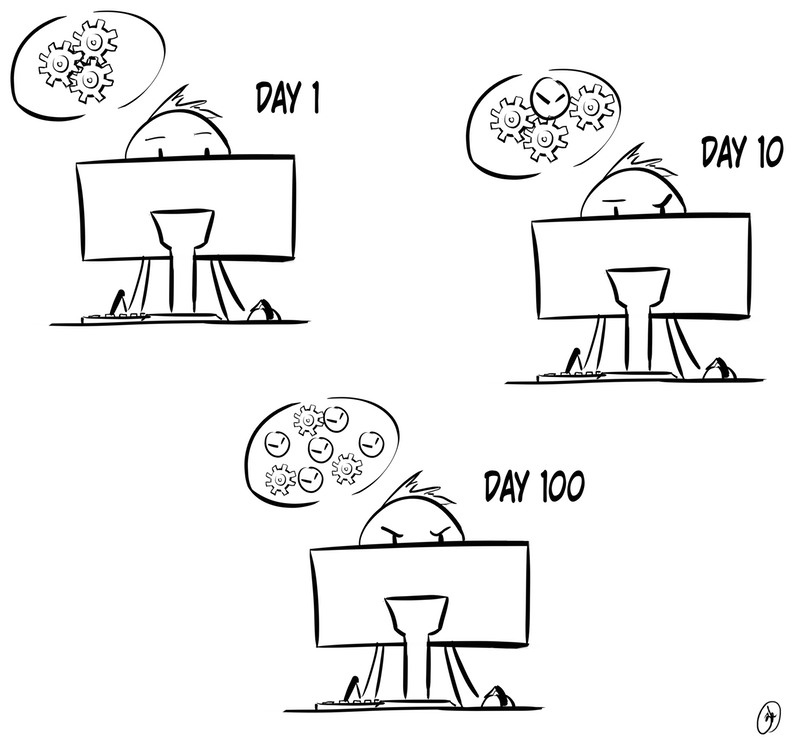 Sometimes I notice that I have just wasted one hour or so because of some bug in my code, or something that I did wrong. When that happens I try to step back, understand what I did and try to come up with a change in my way of working that will prevent it from happening again.

The funny thing is that over the years I’ve gathered several guidelines that I use, and sometimes when my teammates question me about them, I actually don’t remember the whys. I just know that it’s a best practice and that I should follow it. But on this article I tried to go through several of those practices that I follow and tried to justify them.

There’s also a part 2 with more patterns, mostly related with testing, readability, and style. Using these patterns could turn a project into something that no one wans to work at.

Whenever I see code throwing an exception without additional information, I frown. Something like:

With the exception we get a stack trace and the information that something was wrong. But most of the time we lack the context to understand the problem. Data like the current user, the current object’s data, what were we trying to accomplish and what were we expecting. As a rule of thumb all custom exceptions should have data describing what was happening.

This will allow us to have much more information.

When something goes wrong it’s useful to have information to troubleshoot. In several languages (Ruby, JavaScript) there isn’t much attention to logging, while in others logging is a very important thing (Java).

For example, in Java I was used to see code like this:

And this is actually much better. But the problem is that we’ll have to search the logs for when this happened and that may not be easy. Actually, it may actually be very complex to get the logs if we don’t have access to the production environment.

But we always get the exception. So I always push for better error reporting, and try to sell logging mainly for app’s behaviour.

Constructors with lots of default arguments

This is something that I have seen in Java code bases. Java code and tooling allow for easy refactor and sometimes that allows for this kind of pattern. For example, imagine that we have a POJO that we use in many places, and on unit tests we start having:

When we change the arguments in any way we’ll need to update all those places where we just wanted a dummy Entity. This is code that may be easy to refactor but is not easy to change.

Now if we change the Entity’s’ constructor, all code that uses it doesn’t need to be changed. Note that we may have a more “Java-ish” way of doing this, by creating a builder class. And that builder class could have that “empty” method.

Honestly this may be my biggest complaint about coding in Java. Having to create those builder classes is always cumbersome. Yes, our IDE may help, but if we want code that is properly documented we still need to go and take care of all the builder’s methods.

Anyway, we could make this more simpler by just creating a constructor with no parameters. But whatever the approach we take, a question remains: are we adding code just for tests? And yes, we are. We are changing the class’s API just because of tests. Now on this scenario I’d rather focus on testability, and wouldn’t mind.

But there are better options, mainly by creating a factory class just for tests, that could use some faker logic, for example.

This is mostly common on languages that don’t have enums. It goes like this:

The problem is that these statuses start to leak. We’ll start using them by name on several places. They are prone to typos and it’s hard to maintain. Imagine that you add a new :rejected status. It’s better to abstract these concepts on specific constants.

Now the Invoice class is the owner of the statuses concept and it’s easy to change without being concerned about code that uses it.

But we can also do better. Because in the future we’ll have this change request:

We want a rejected status, but just for Portuguese speaking users.

Now just constants won’t do the trick, and we have constants all over the place. We can refactor, but it would be better to prepare for this from the start.

This way we have a good default, but can augment it with additional information.

I’m talking about classes that represent services, interactors, use cases, and overall higher level interfaces. Classes that form an API that is public and used as boundaries to other layers. In dynamic languages we may have arbitrary arguments and that’s great for maintainability. If we define a strict API we’ll have the following scenario:

We may end up with:

This will be very hard to maintain. And when we’re at this situation, if we want to change the order or the semantics of an argument, it can be complicated without a breaking change. We could always create additional factory methods. But that’s more code to maintain and test.

Another options is to assume that the argument list will be changed.

This is much more readable and easy to maintain. But we’ll need to consider proper documentation and validations. In a typed language this could be a POJO just for the arguments.

Not using an hash for optional parameters

This is related with the previous pattern. Sometimes we have methods that have some options and we just add more parameters for them. I actually do this some times and I usually regret it.

Seeing that true there is already a smell. Because we’ll never know what that boolean does unless we read the docs. For these scenarios is much better to augment the function to receive options:

Using a hash instead of a typed object

Following on the previous example, if we’re using a strongly typed language, using a map/hash/dictionary may actually be bad for maintenance. We may start to get things like:

Java developers may already be getting the shivers just by seeing raw Strings. In this scenario we could create a POJO with all those information, and it will be much more splicit.

It’s interesting that I find this typed approach better on typed languages, but for example in Clojure I don’t miss it. Having a data map with the information and a spec to validate that I’m getting what I expect would be preferable for me.

This is very common on Rails applications. ActiveRecord makes it very easy to get data and persist it on the database. And you can use it everywhere. For example, you could see something like this on a simple property of a PORO:

I added a big train on purpose. Without knowing the code, I don’t know if that will perform one query with several joins, or if that will perform several queries. Each object may be fully loaded, even if we don’t need it. That code will also get a connection from a pool and connect to somewhere.

There are a lot of things going on. And when that happens, it means that the probability of changing something is bigger and it will be hard to maintain this code.

In these scenarios I actually advocate for having some constraints. For example, if we have a class that performs queries that receives the connection pool, we wouldn’t be able to use it here, because we wouldn’t have a connection. This would force us to think about our data model and where to fetch the required data.

And it would make the can_get_drivers_license? a pure method, that is very easy to test.

It may be fast to use ActiveRecord but we need to consider the cost of doing so and try to minimise the dependencies we have on it.

There is a rule that says that each method should only have 5 lines. This would be harder to accomplish on some languages. And while it might bee too extremist, I already felt the need to enforce it.

But the main point is that we should split things in smaller methods/functions, preferably pure. For example, I’d argue that most code in a branch could be a specific method. This can be cumbersome. We’ll need to extract it, and write documentation for it, and add a test. Example:

This is much more easy to read and to change. Having filter(isUserReasy) communicates directly what that line is doing. We may have simple logic inside the lambda, but we will still need to read, parse and interpret that in our minds And sometimes it’s not that easy to really understand what’s happening.

Code that knows more than it should is very hard to change and adapt to change requests. Consider for example a very common thing in Rails applications: the ability to easily send an email.

To understand the problems of this line that seems so innocent, let’s consider some change requests. The first one is: users can define in preferences what emails they’d like to receive.

Now we’d have to go to all places where we user mailers and we’d need to have the user preferences somehow, that we might not even have. We should obviously now create an abstraction that handles emails and hides those details.

Then another change request: we won’t do emails anymore, we’ll use a tool for that. Marketing and product teams want ownership on the emails and want to build the templates and manage everything. For that they have an app that receives events, and then they can do everything by themselves.

Ok, so now we have to convert all those mailer calls to something like:

And we can create a nice event bus for this and have everything decoupled. But this refactor may be painful. What data does UserNotifier.order_placed used? We don’t know. We’d have to go to that method and associated template and see if somehow we also need to send information that we’re not expecting.

This is a simple scenario where coupling doesn’t seem that problematic. But from experience, can be very troublesome to refactor.

I think this is the recipe more close to the concept of spaghetti code. Basically because when you start this way, it will be harder to step back and refactor. And you’ll have new changes just following that format and things get messy.

This tends to get big, and very hard to maintain. Usually whenever we have a variable being mutated we should be aware and check we if really need that. The amount of variables available and if they can be mutated contribute a lot to code that is harder to maintain.

Sometimes switch has a bad rep. But I find it useful on several occasions. I believe the biggest problem comes from using a switch to process logic.

When we have this, we know that several things will happen:

It’s very hard to get the full picture and understand changes. We could use an hierarchy with polymorphism or a map from operation to function. By splitting the logic we can have a better view of the global picture, while also being able to dive in a specific operation logic.

Writing code that is easy to read and change is very hard. We usually don’t think about that because we’re focus on the moment and want to build something. There are some practices and patterns that can help us to write better code by default, on the first try. But we need to always be practicing and trying to improve our coding skills.

Don’t forget to check out part 2 with more code patterns that are a recipe for trouble.