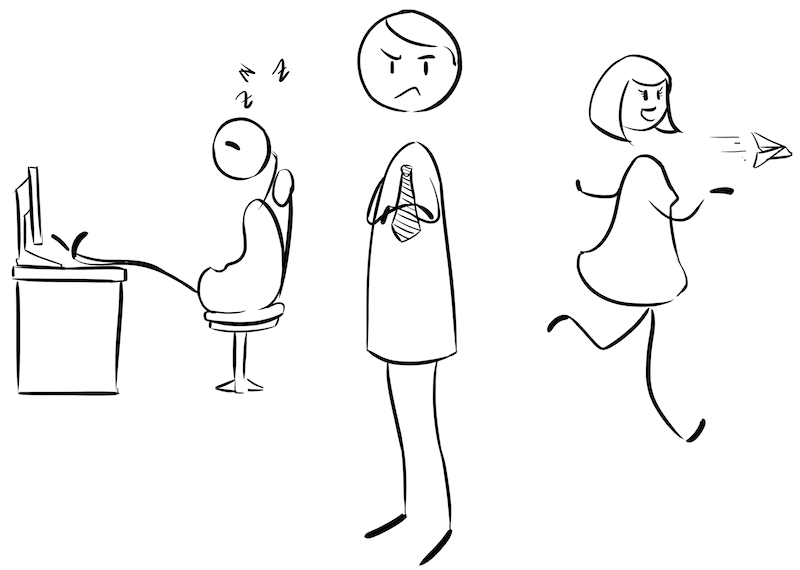 How is that project defined

Usually these projects are defined by overall low quality: on the code base, on the tools and processes and maybe on some members of the team. Sometimes it’s very hard to prevent low quality if we’re aiming for very fast time to market. This coupled with less experienced developers, harsh deadlines and a bad leadership is a recipe for failure.

We may not see problems at the beginning. The team may seem to go fast and delivers on time. But all that tech debt will start pilling up and will affect the team’s productivity and healthiness.

Sometimes we do need to rush do deliver something. But we should not allow the team to grow a mindset of get things done no matter what. Because that will be very hard to turn around.

Be very careful with code patterns that are a recipe for trouble.

With low quality usually we have lots of bugs to attend to. We start to have our bug tracker filled with bugs and lots of complaints and start to have some clashes with the support crew.

Having blocker bugs in production that affect clients is always frustrating and we start spending more time on bug fixes than on features and improvements. We need to be very careful not to get on this spiral.

Complexity will mean that code is not easy to change or fix. We may have lots of code copy pasted and changing on one place means changing on several places. Naturally we will forget some place and may only be warned by some angry customer in production.

Usually we also don’t have documentation stating why things are the way they are. So it’s very difficult for a developer new to a part of the code base to understand what’s happening. This brings risk and slows down development.

We may only get this in parts of the project, like that payment processment module that no one understands, and no one knows how it works and the developer that implemented it left the company 2 years ago.

Developers on other projects are aware of the bad reputation and refuse to work on the project. They may not know what are the challenges or the problems but even so that bad rep will spread all over the place.

This will start a negativity spiral around the project. Other developers will say bad things and criticism will be easy. This will frustrate the current developers because the project and themselves may actually be the target of mockery.

This usually starts with teams that interact directly and that depend on that project. Even without context it’s easy for someone to reply to an email or go to slack and say something like: that new release is very bad, full of bugs, they did an awful job.

The truth is, sometimes that was the best possible.

Not having a test suite on these kind of projects means that every change we make has a very high risk of breaking things. And we may only know about that when we push to production. We may have developers that don’t think that tests are valuable and that fight against them.

And sometimes we do have a team of developers that know all the project and the implications of every change and can maintain an application without tests. This breaks when we add someone new to the team. It’s easy for someone to make assumptions and change things that shouldn’t be changed. And without tests, it’s easy for those problems to impact production.

“I can’t recall ever getting a call to help a department or program get its application back on the rails and discovering a nice, healthy unit test suite.” - Interview with Erik Dietrich

Even if we have a test suite and a CI pipeline, having one that takes lots of time (hours) will impact the velocity of the team. The team should set the maximum time for feedback and try to have the CI pipeline bellow that. When we submit a patch, ideally we want to know if everything is ok on the next minute. But this can be tricky if we have a slow test suite or lots of integration tests.

If we need to wait, we have two options:

I’ve seen developers with 2-4 patch threads just because of this. And it starts to affect their speed and ability to reason about what they’re doing.

We can also have manual validations. This can add to the feedback slowness and we need to be careful with it also.

It’s a mystery how to setup and deploy

This is when you need a couple of days and the help of your team members to put the project working on a new machine. Usually because there’s always specific context and patches, or some tricks you need to perform. This is very frustrating specially when current developers get a new machine or when you need o upgrade your machine and are afraid that it you’ll need days to get back on track.

This goes hand to hand with hard to deploy mechanisms. If we don’t have an automatic way to deploy artifacts we’ll have to do it manually and that’s always error prone. Sometimes we actually don’t know how to deploy. This can happen on smaller services that are deployed once, and then we only need to do a fix a couple of months later:

We may have one ore more team members that are problematic and that no one wants to work with them. Could be because they like the way things are going and don’t want to improve the quality/experience of the project. Or because they have a strong clashing personality and rule all the decisions.

They can also be technically excellent but generate a bad mood.

Old or not sexy tech stack

Having a project that has an old stack means that the dependencies are old and that an upgrade will be very complicated. So that upgrade never happens. This means that if we want to use new dependencies for something, we may not be able because the project is too outdated.

The used language/framework may also stop having support and new patches.

This is bad specially for hiring, because developers consider their careers and the added value of developing on old stacks is not that good. And current developers will also start to consider if they’re loosing track of new things and what’s their market value.

How to turn the ship around

Understanding and listing the problems is the first step. We need to be concious of the problems and start to make a plan to fix them. All these problems impact the recruitment of talent and affect the time developers want to stay at the project. If we think about it, having developers on these kind of projects that are ok and don’t want to move, is a big red flag.

We need to go step by step. Knowing the team’s biggest pains allows us to know what adds more to the frustration and we can add motivation to the team if we give them resources to fix them.

Allow developers to make a plan and fix things

If we are fortunate enough, we may have developers that really want to fix things and turn the ship around. We need to invest in that, we need to provide them with resources (usually time) and let them come up with a plan to fix things. We need to be careful not to plan for the long term, but to break the plan and advance patch by patch.

This will balance the frustration with developing with the bad problems and the motivation of fixing and implementing the good parts of the system.

Turn the ship around

This is actually a huge accomplishment and if we’re lucky to have a team that is willing to make this happen, they will be very fulfilled then they reach that goal.

We do need to be careful with the size of these improvements. Improving code, tooling and processes is great but not for a very long time. Developers may forget about their drive and realise that it’s just too much for them to change, and start considering their future.

The full team needs to be aligned on this. Having part of the team that falls back to previous practices will cause discussions and frustration.

How to prevent this?

This should be our focus. Sometimes it’s not easy to see these problems coming and when we realise it’s already too late. What can we do about this?