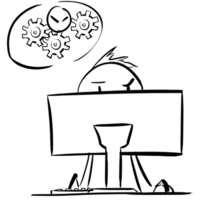 The other day I was doing a code review and noticed that a mechanism for i18n was added to a new project we’re working on. There was a line like this:

This is very simple and common I’d say. Even so I left, as I so usually do, a suggestion as a comment:

Suggestion: wrap i18n.t and i18n.n in an abstraction that we control.

The other developer asked for more context. Why would we need those functions? Would they just call i18n.* directly? What would we gain from it?

And I had that funny feeling where I knew that we’d get something to gain from that change, but couldn’t remember an example for it. I did say that we’d be coupled with an implementation that we don’t control, and that we could be hurt by typos. But honestly that didn’t sell my case.

The downside of abstractions

I then started to consider a new challenge that I’m aware of, that relates with the quantity of things developers need to learn to get the necessary context to be productive.

We build abstraction upon abstraction and that means that new developers will need to learn it all. This is a nice example. Other developers could be very familiar with the i18n’s library and its API. But if they get to the project and see something different, they would need to check it out and learn how to use it.

And this compounds… abstraction after abstraction. How can we make projects more simple to onboard? What’s the cost of our abstractions and how can we minimize it?

It’s not that abstractions don’t have their value. They have a huge value. They represent knowledge that we wrap under a concept and allow us to be more productive and succinct. But then we have the knowledge trade-off.

Why would this specific abstraction be useful?

A couple of days after that pull request discussion I remembered why I felt the need for an abstraction on the i18n layer. I worked on a project before related with invoicing and we had support for several languages. Some day we got this feature request:

We now have accounts that have specific tax constraints. So if an account is from type A or B, instead of the label ‘Tax’ we want to display ‘Tax B’.

This was a huge project and had this label everywhere. Sometimes the tokens were dynamic, so a simple search and replace didn’t fix it. It actually took some weeks of user bug reporting until we got the feeling that everything was covered.

If we had this abstraction if could easily act under it:

This is a raw example. I wouldn’t do this way: it wouldn’t scale on complexity and we’d have to test things on each token resolution. But it proves the point that the abstraction gave us options. I would use this temporarily to log whenever we had that scenario. And then would update the caller code:

With a good test coverage maybe we’d get all the occurrences just by running the test suite.

Our experience transforms the way we do things. Sometimes we get the urge to over complicate because we’ve been in situations that turned out be be more complicated and we weren’t prepared for that. We can’t have it all:

Writing code that is easy to change and ages well is hard.