What would be a good set of key performance indicators for engineering projects and teams? We’re usually accustomed to see KPIs in a business context, and more used by sales, marketing, product squads. But I believe that the exercise of figuring out KPIs is very important. We’re talking about measuring our performance with simple numbers. Is that possible at all?

If we do figure it out, we’d have some kind of software development metrics dashboard. That would have value by itself. We could see were we’re at, we’re we going and the impact or correlation between KPIs,

But it’s very difficult to measure productivity in software engineering teams. Having the work mostly being creative makes the modeling it as numbers pretty tricky. We may look to KPIs that only reflect volume, but neglect to consider added value. The typical lines of code metric comes to mind.

I started this exercise by trying to focus KPIs in terms of added value and things that slow us down.

The value I see in KPIs is mostly regarding the future. If we can use past data to have a glimpse of what’s ahead we can act today on it. This forecasting approach really depends on having KPIs. Let’s for example consider a “Number of Releases” KPI (or deploys to production). We can assume that more releases are better. They add value to the business. If we look to the past months and chart our releases we can come up with a formula for predicting what’s ahead. For example, if the average per month is 3 releases, then we could assume that the next months we’d always have 3 releases per month.

And with this equation we’d be able to see how many releases we’d have accomplished by the end of the year. Now this is guessing. But having this formula allows us to change it to contemplate optimistic and pessimist scenarios. And then we’d have target window. 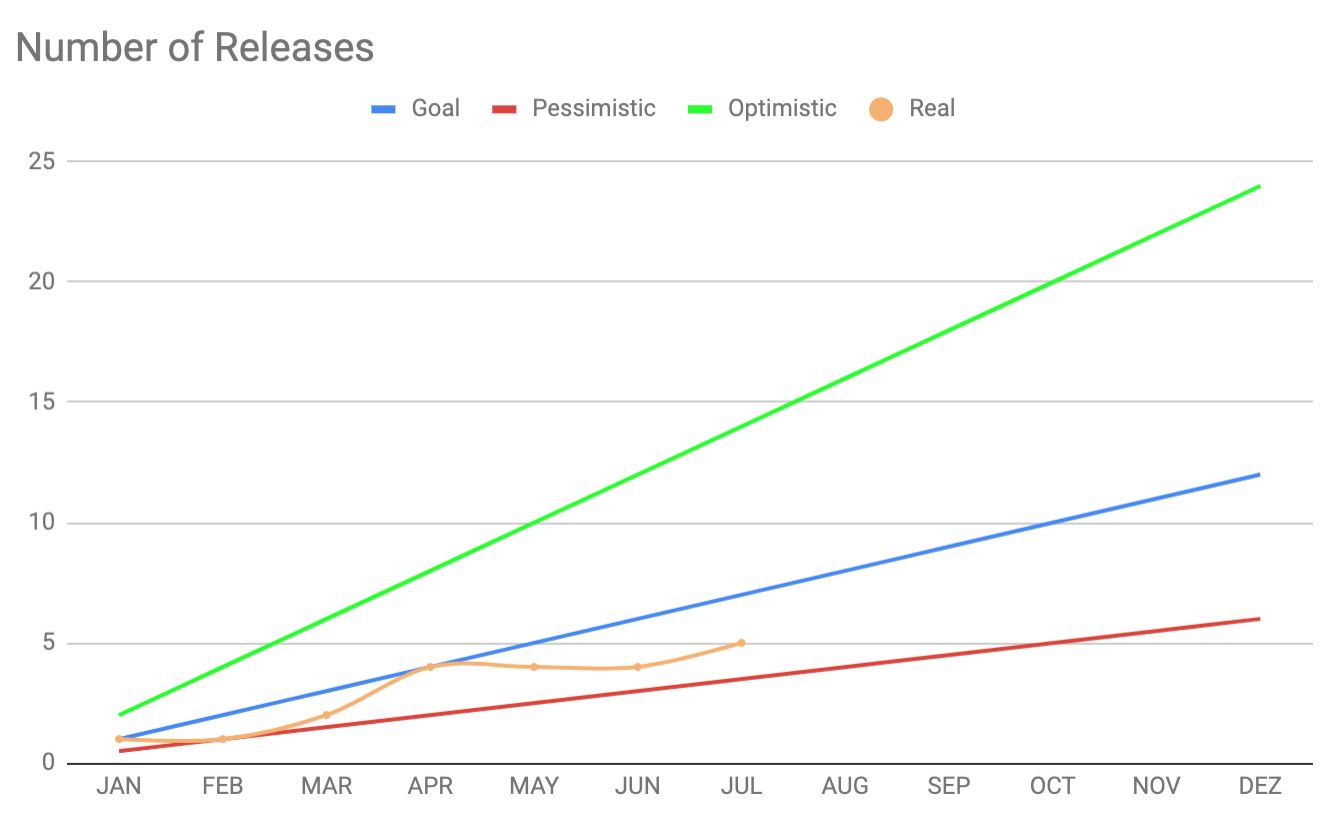 This chart shows that window. It has the optimistic, pessimistic and goal lines. And then it has our current situation. We can see that we’re currently bellow our goal. We’d need to adjust our process/strategy or expectations.

By putting other metrics on the same chart we could find some correlation. How does changing developers impact other KPIs? We may deliver more during crunch time, but how is our added vale impacted by it afterwards? And by using data we can start to see other types of trends and better understand what makes us tick.

By now I’m convinced that tracking and analysing these KPIs adds value. But I still don’t know what KPIs to pick. Following a decision log process, I’ll try to define some and then come back to verify if they’re adding value or not.

Is it good one month later?

Still trying it out…

Is it good 6 months later?

Ultimately KPIs will be custom for each team. Some teams may want to track story points or delivered epics. It’s important to focus on added value and run away from vanity metrics. But I do realise that some times is hard to distinguish between the two. KPIs is another process that we need to incorporate. This means that someone needs to do the tracking or implement data gathering. So it should be adding value by itself. If we just have a bunch of numbers but we don’t use them to make informed decisions, we’re missing out.